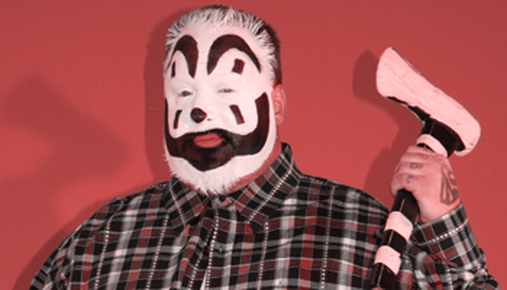 QUESTION: We know the Mighty Death Pop translates to “sudden death”, but what is his role in the Dark Carnival story?

VJ: As you probably know, each Joker’s Card serves as kind of a life lesson for those who were somehow meant to hear its message through the Dark Carnival. My interpretation is that The Death Pop teaches us to respect the life we’ve been given and do our best to avoid an early death.

Some people play games with their own mortality. They try and impress their friends by doing outrageous stunts and taking stupid chances with death. They Gamble. Playing with your life certainly can be attractive because of all the attention, the pats on your back, and everybody saying how brave and fuckin’ crazy you are! Almost seductive in some ways. That’s why the colors of TMDP are white, pink and yellow, as if there’s no danger to it at all. But in reality it’s among the deadliest of the Joker Cards yet.

When you take big chances with your life you’re obviously not considering the very real possibility of The Death Pop enough. It’s all good and exciting until POP! Then the fun instantly dies. SHUT OFF. The Sudden Black Out. The Death Pop doesn’t torture these reckless souls; he just suddenly pulls their plug out. Weather they rise or drop from there I guess is up to who they were when they got popped. And just like he can be avoided in life, he can easily be provoked as well. He loves to pop big shots. I’d say his role in The Dark Carnival is to teach us to respect our lives to the fullest and don’t even fuckin’ play. Ride this bitch as long as you can and live your legacy out to its fullest.

QUESTION: Will ICP be doing any songs from the Mighty Death Pop at this year’s Gathering?

VJ: Of course, the Mighty Death Pop is being born that weekend.

QUESTION: Are Tech N9ne and Hopsin on the same track and are those the only guests on the main album or is there more?

VJ: Tech N9ne and Hopsin are both on the same track with us. We put them on the main album because we know mad Juggalos love them like crazy. We respect the fuck out of Tech N9ne. His shit is so fuckin’ dope and he works so hard that he motivates us to make our best even better. Strange Music motivates all of us on the independent grind. And then you got Hopsin who is fuckin’ making huge noise doing his thing his own way. He tours all the time, he has an impeccable flow, and his lyrics are fuckin’ witty and clever.

We knew we wanted a guest on this Joker’s Card. Maybe even two. We thought about how on the 5th Jokers Card of the 1st Hand - The Amazing Jeckel Brothers back in ‘99 we did a song with Snoop Dogg and another with Old Dirty Bastard. Here we are today, and we wanted to do something similar for this Joker’s Card. Tech N9ne and Hopsin were among our first choices. The way we see it, it features 3 big players, from 3 different Indy labels, all respected in the same underground scene, together on a dope Mike E. Clark track? That my ninas, is dope.

QUESTION: Is The Main Album any different with each version?

VJ: No. The main album is exactly the same in all three versions. The main album truly is the Mighty Death Pop. You could even look at it like this… The Mighty Death Pop really comes free, what you’re actually paying for is the bonus album. It’s just a matter of which of the 3 bonus albums interest you the most? For the ninjas who want all three bonus albums, they just gotta buy each one. Then they got two extra Death Pop CD’s to do whatever they fuckin’ want with. Wear them as earrings if your neck is long enough.

QUESTION: How the fuck are you gonna make a Christina Aguilera and a Yo Gabba Gabba song BAD ASS?

VJ: Because we’re BAD ASS! Look, I just wanna say again that these bonus albums are not the 2nd Jokers Card of the 2nd Hand. These are bonus materials. We are having fun with this shit, while doing our best to entertain Juggalo ninjas. All the immense pressure and heavy concentration went into the making of the main album. Because that main album is really the only thing that matters about the Mighty Death Pop in our eyes. That one main album from start to finish, which is the official Joker’s Card. That’s what ICP should be judged on. That’s really almost the only time ICP is ever fully committed to the Dark Carnival musically. Aside from the Joker’s Cards, we really don’t have any rules or guidelines to follow. Especially with bonus material.

We’ve never been afraid to get emotional. We tried to show this was who we are way back on our very first recordings. We are hardcore wicked all day, but we ain’t afraid to show a soft side whenever we want to. ICP has been like that forever. We’ve done deep shit from “Life at Risk” and “Joke Ya Mind” all the way up to “Miracles”. If we wanna make music from the heart and soul, and show some sensitivity sometimes, we will damn sure do it. We are the ones leaving our legacy behind us and it’s up to us to tell our story how we see fit.

If we make music, then it’s ICP music and if we made it, then its 9 times outta 10, BAD ASS. There are no expectations that we absolutely have to live by. We don’t have to make sure and cuss or kill on each and every song. That’s not how we operate. Fuck that. We keep it real by being ourselves, and showing all sides of our soul’s emotions.

QUESTION: How did you become close with Fred Durst?

VJ: Well, we wouldn’t say we are close to Fred Durst, but we’re defiantly cool with him, I guess. When we first started touring, Limp Bizkit was doing it fuckin’ BIG. As BIG as possible. They we’re defiantly MAINSTREAM to the fullest. But a lot of the music and their shows were just that dope. Back then we liked some of what we heard of course, but we left it alone, I won’t lie. It was way too popular for us. But as you know, there’s a time limit when you’re on top like that. When that time runs out, then you gotta scoot the fuck down over.

Here we are a full decade later or so and Shaggy and me are sittin’ there thinking of who we could get for these crazy collabos? Who would people never expect to hear on a track with ICP? And who would be down to do it? BANG! Nobody would ever expect an ICP / Fred Durst collabo! We reached out and turns out, and I can’t lie, he was cool as fuck. We got him on the phone and kicked it for days. He defiantly has mad respect for ICP. He said he’s always dug our shit but figured we would hate on him if he ever said anything about it. He said just last year he posted our gathering doc “A Family Underground” on his website” He was cool as hell about everything. We was shocked, it was cool.

I sent him two songs to choose from and he chose the remake of AMG’s “Bitch Better Have My Money”. He knocked it out, and he didn’t want shit for it. He was just happy and surprised that we wanted him on it. Then as I’m watching Limp Bizkit play for 150,000 people last year all over Europe on YouTube, I’m thinking about how bands and rappers are so much cooler when there not so cool to America’s mainstream. It’s crazy but that’s how it is for us. When everybody’s jockin’ them, we just can’t seem to hear it. But 10 years later, it’s like we suddenly rediscover it and now it’s ok for us to bump it. Like with Vanilla Ice, Slash, Color Me Badd, MC Hammer, Bobby Brown, and so many others who we‘ve worked with and who’s turned it out at the Gathering.

Now, in my opinion, this seems to be happening with Limp Bizkit. Next thing you know we’re talking about them about playin’ the Gathering and Fred Durst asked “Do you think the Juggalos would have us?”... You know, that’s a damn good question. We honestly don’t know. We even posted a poll on the internet that answered some questions for us to some degree. As for Limp Bizkit, we put them in a line up with 4 other huge bands and asked who would ninjas rather see. Limp Bizkit came in 3rd behind Korn and Rob Zombie, just ahead of Puddle Of Mudd.

We think it would be fuckin’ awesome if they played the Gathering. They’re the underdogs now. Their concerts are mother fuckin epically hype and now that they ain’t the mainstream darlings of the day they just seem way fresher to me. Now that all the fake ass part time sellout fans don’t want them anymore, I kinda wanna bump that shit. These days everybody kind of tears into them and criticizes them. As far as the Gathering though we respect the Juggalos opinions more than anything. It’s their fuckin’ house and they say who can come in. And I’m with whatever their opinion is, whatever it is. So what is it? Would y’all wanna see Limp Bizkit rock the Gathering or fuck that?