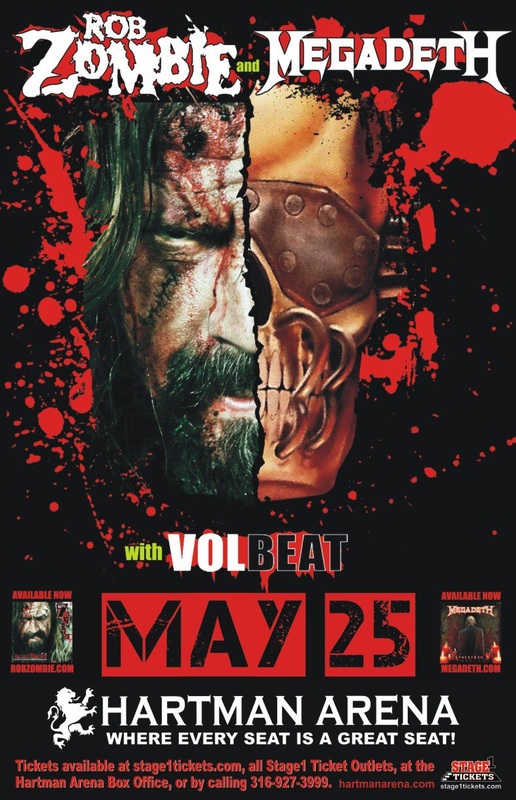 While most people were driving out of town or flying out of the nearby airport for Memorial Day weekend in Wichita, KS, those that stayed in town were treated to a trio of headline capable rock bands at the Hartman Arena.  On May 25, 2012, Volbeat, Megadeth and Rob Zombie combined forces for an unforgettable show at The Hartman Arena in Park City, KS.  Rock music fans came from all over the area and even out of state for this impressive show.  Fans even started showing up 5-6 hours before the main doors were scheduled to open, just to secure their spots up front as their favorite bands played.  Local radio station T-95 95.1FM, The Rock Station was on scene at the show and hosted winners for the Rob Zombie meet and greet contest.   Hours before the show began, lucky contest winners were taken back stage to meet with Rob Zombie and John 5 to get autographs and photos taken with the stars themselves.

Not long after the doors opened, fans flooded to the merchandise booths as well as the multiple food and beverage stands that the Hartman Arena had to offer.  Eager fans also lined the front rail of the floor in front of the stage to get the best spots they could before the show began.  First up on stage that evening was Volbeat, travelling all the way from Copenhagen, Denmark.  The Danish metal band just finished playing Rock on the Range in Ohio as well as Wisconsin and Iowa earlier in the week.  Opening up with “A Warrior’s Call,” was the perfect way to get the evening started as fans continued to make their way in to the venue and down to the floor.  Michael Poulsen’s unique vocals, along with Anders Kjølholm on bass guitar and Jon Larsen on drums ensured tracks like “Guitar Gangsters & Cadillac Blood” and “Another Day, Another Way” sounded on point.  Paying tribute to the musical stylings of Johnny Cash, Volbeat then played “Sad Man’s Tongue” and then later followed up with a cover of Dusty Springfield’s “I Only Want To Be With You.”  They finished their quick 40-45 minute set with “Still Counting.”  Volbeat also teased the audience with some Slayer tracks, and then departed the stage after a roller coaster ride of a set.

Click to view the full gallery.
Some fans stayed up front or on the floor, others left for refills and restroom/smoke breaks, but those that remained were in perfect position for the next major headline capable band…Megadeth.  After a quick set change, the crowd was soon greeted to a curtain before them hiding the Megadeth stage setup.  As soon as the lights fell once again, Dave Mustaine could be heard playing the intro to “Never Dead” behind the curtain.  Once the curtain dropped, fans roared as they were once again reunited with Dave Mustaine, Shawn Drover, Chris Broderick and David Ellefson of Megadeth.  Barely giving the audience a chance to recover from the impressive intro, Megadeth then continued on to tracks such as “In My Darkest Hour,” “Hangar 18,” “Trust,” “Angry Again,” “Sweating Bullets,” and “Symphony of Destruction.”  Dave introduced the audience to a new track titled, “Whose Life (IS It Anyways?”), which confronts those that always tell you what to do in your life.  The visuals and Megadeth logo changes in the background were a perfect accoutrement to the musical set throughout the performance.  This was especially so when Megadeth began playing “Peace Sells” while showing clips of the video of that track in the background.  After a brief break, Dave and the rest of the Megadeth crew came back out for an encore with “Holy Wars… The Punishment Due.”  Soon after the band left the stage, the curtain dropped for the last set change of the night for the headliner himself…Rob Zombie. 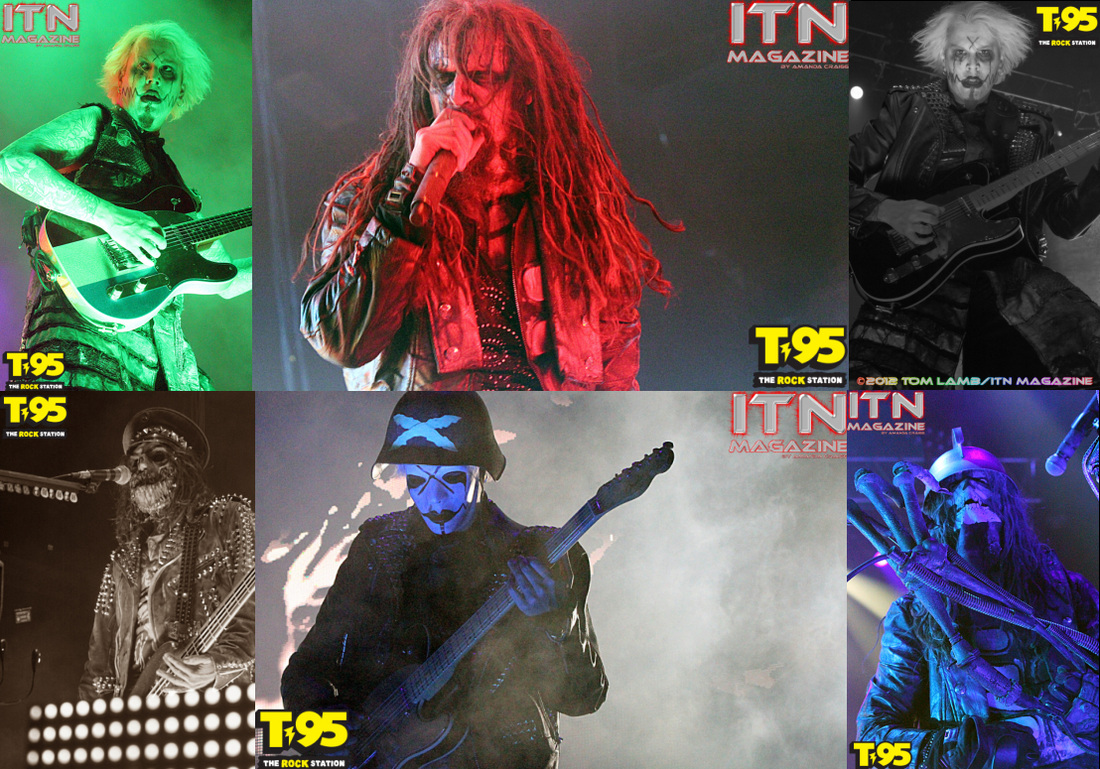 Click to view the full gallery.
After about 30 minutes, Rob Zombie’s stage setup was complete and all was in place for a spectacular show from the director of House of 1,000 Corpses and The Devil’s Rejects himself.  Fog machines started pumping out smoke into the crowd as the lights fell and the curtain dropped to a screen showing various horror movie images.  John 5, Piggy D and Ginger Fish all took to the stage in a slow, stealthy fashion as more smoke covered the stage and the front floor.  A tall, dark figure with a claw soon emerged from a metallic robotic figure that was engulfed in flames.  It was Rob Zombie himself as he took center stage and immediately opened up with “Jesus Frankenstein.”  Rob didn’t keep the crowd waiting long at all after the intro track and immediately began playing “Superbeast,” “Scum of the Earth” and “Living Dead Girl.”  A multitude of old and new horror movie images danced in the background during the entire set.  Robotic creatures roamed the stage along with Rob and the rest of the band  during “More Human Than Human,” and “Mars Needs Women.”  Rob showcased some of his directorial work during “Pussy Liquor” as scenes from House of 1,000 Corpses played in the background.  Rob finished up the set with “Thunder Kiss ‘65” and “Dragula” before launching a fountain of confetti into the audience to end the evening in his standard fashion.

Volbeat, Megadeth and Rob Zombie gave music fans a good show before the start of the holiday weekend before heading out of town for Rocklahoma in Pryor, OK. 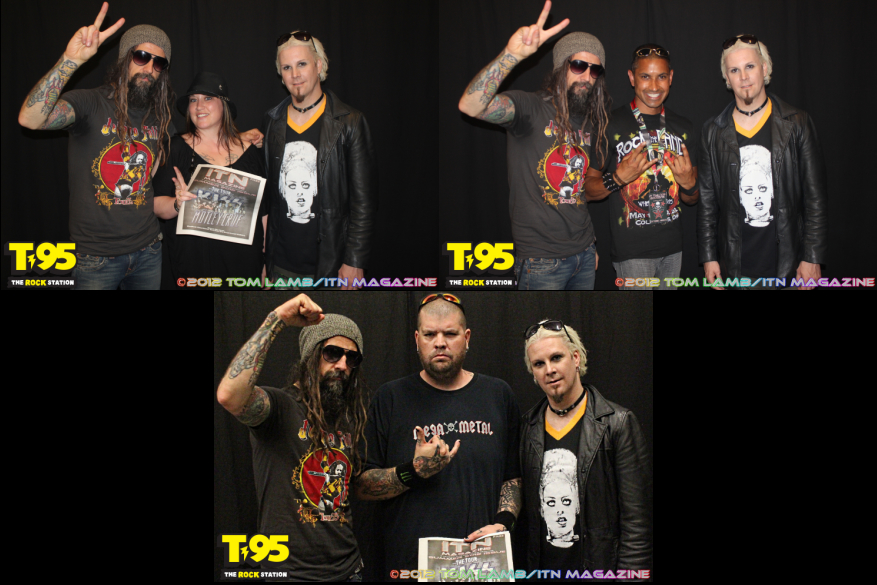