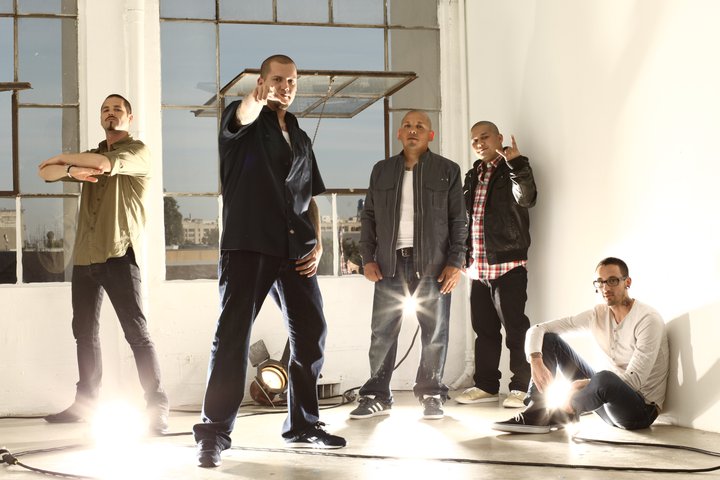 Hello ITN, this is Joe Anselm, vocalist for DAG, I will be answering the questions on behalf of the band.. thank you for the interest, we really appreciate it!

ITN Magazine: Tell us about the history of the band. More specifically, when was the band formed, how did you meet, and have there been any particular highlights or low points in your career, any crucial events that have taken you where you are today?
Joe:  Day Above Ground, in it's essence, started with our guitarist, Mike Zavala.  As a young, ambitious guitarist, he wanted to start a band that would rise to the top, so he started bringing together musicians, began seriously jamming, and didn't stop until he was surrounded by the high caliber players the band is comprised of today ..and there have been many ups & downs, and many different players come & go throughout the past couple years, some of it personal, some of it not, but in the end, what prevails is the music and our love of what we have created ..and we have seen some amazing support in all forms from people that are close to us ..those crucial helping-hands have made all the difference.

ITN Magazine: Do you remember how the idea of forming the band first came up?
Joe:  As I had said, it was initially created just as a project by Mike (guitarist).  I don’t know what the hell was goin’ through his head at the time, haha!

ITN Magazine: How long after you formed was it until you played your first live show?
Joe:  As far as the final line up, it was only about a month before we made it to a stage.

ITN Magazine: What are your memories of the performance?
Joe:  Disastrous!!  I’d rather not talk about it.  But for the record, it wasn’t our fault.

ITN Magazine: Tell us about the band's name?
Joe:  Mike was driving big rigs, payin' bills on 18 wheels, when he was listening to a random radio interview.  He heard someone say, "every day above ground is a good day"..  it stuck with him, and thus, we are Day Above Ground.  And that phrase has since become our motto, along with “Day Above Ground, we ain’t no clown”, haha..

ITN Magazine: What is your latest album and why should people buy it?
Joe:  It’s our debut full-length, and it’s called “HIGH VIEW”..  People should buy it because it has everything they want: great riffs, powerful choruses, energizing flows, and enticing rhythms.  Every song is unique, so I promise there’s plenty in there for everyone.. Nothin’ but strong tracks from start to finish, no fillers!  But see for yourself!  We’re super proud of this one!

ITN Magazine: How would you categorize the style of the band? And did you ever consider or try playing other styles of music than the one you are playing now?
Joe:  It’s funny, we’re always a little hesitant to call it Rap Rock, because over the years, that genre has grown a bit of a bad name and stigma around it.  We prefer to call it Rock, or our own creation, Groove Rock.  In our music, we have rap, we have rock, but it’s not gimmicky or cheesy, we’re just doing what we all individually and collectively do best.

As for me, I’ve sung all kinds of music.  I love anything that is truly good musically, no matter the genre.  I’ve got band friends in Venice that sing country rock and others that do Bluegrass tunes, and I occasionally sing back up in both.

And of course, I started honing my chops in a classic rock cover band all over west LA, you know, The Doors, Stones, The Who, Sabbath ..the works.  I was also in band called Duality, that has since disbanded but still finishing a one-off LP.

ITN Magazine: Can you share with us one or two of your favorite moments with the band?
Joe:  Haha, yeah, one was when we found our EP cover and band photo on the website of famous photographer, Patrick Fraser.  He did our first photo shoot, and he has seen some legends in front of his lens, no doubt.  So when he chose us to be on his page we flipped, it was an awesome feeling!

Another favorite moment is when we know we’ve completed a new song.  Every time we can look at each other, and say, “Daaamn, we just did that?!”  ..that may just be one of the finest feelings in the world.

ITN Magazine: Does the entire band contribute to the writing process?
How important do you rate the lyrical side of your albums?
Joe:  Well, for “High View”, about half of the songs had been an assembly of many ideas from Mike as far as structures created on guitar, and as the final band line-up fell into place, we contributed our parts accordingly.  The other half of the album was created from any one members idea, and that released a flow of input from everyone, a true collaboration.

In definition, lyrics and melody are the only two elements needed for a song to exist.  I take both very, very seriously.  What is a song without great lyrics?  Now, I’ve heard from people to “dumb it down” or “keep it radio”..  Fuck that!!  That’s no way to change the world or even the world of just one person!  I’m all about writing hits, but you can still do that without sacrificing your artistic dignity.  What lasts are the words.

ITN Magazine: What are the current tour plans, if any?
Joe:  We are currently working with a booking agent to set up some local excursions around the West Coast.  A San Diego weekend is on the horizon, then Vegas, San Francisco, and eventually a trip through Arizona.

ITN Magazine: Describe your live performance?
Joe:  We know that an actual set time, at this point, is really not that long.  45 minutes to an hour at most.  So, in that small window of time, if you don’t leave your fucking heart on that stage, you haven’t said a damn thing.  So in short, we bring it.

ITN Magazine: Tell us about your thoughts on your local music scene?
Joe:  There is no scene in LA.  It’s a winner take all attitude.  If you can sludge through the mire, and somehow have the kind of quality cream that rises to the top, then you can escape LA alive.

As far as the long-ago coveted Sunset Strip, well, it’s gone the way of the dollar.  Pay-to-play dominates almost every famous venue.  We musicians are now charged to worship at our churches.  What these slick club owners have forgotten is that if they would only seek out the best, like-minded, talented acts they can find and string them together on the weekends, promote the shit out of it, and then pay musicians for their services of entertainment, their clubs would sell out constantly, everyone would be happy, and a true music scene would be born, spawning huge careers for the best of the best.

ITN Magazine: Why do you think people are into your music?
Joe:  Because it’s refreshing.  It’s like nothing they’ve heard, but still familiar.  There are so many elements and moods behind each song, that really does take you on journey.

ITN Magazine: What are your current obsessions?
Joe:  Day Above Ground and Paleo dieting.

ITN Magazine: Is there a story told to you when you were a child that you will never forget?
Joe:  Santa Claus.  I lived for about 9 years thinking Santa Clause was real.  My parents thought they had told me years before ..guess I wasn’t listening.  That was an awful truth; some innocence was definitely lost that night.  I’m pretty sure that has somethin’ to do with the way I am today, haha..

ITN Magazine: What is the most played track on your itunes?
Joe:  It’s neck & neck between, Digi, The Show, and Totally.

ITN Magazine: What is your most cherished musical object?
Joe:  My ding-a-ling.

ITN Magazine: Do you have go-to album on a rainy day?
Joe:  Anything Dylan, Tool, or Radiohead.

ITN Magazine: Proudest moment of your career thus far?
Joe:  Living past the age of 27.

ITN Magazine: Are you most influenced by your surroundings or your inner monologue?
Joe:  I’d say both.  As a writer, you’re a sponge, that’s just the way it is; you’re a damn sensitive bastard.  What you pull in from your surroundings ends up consuming you for a while till you wring yourself out, i.e., write a song.

ITN Magazine: Favorite venue to play in and why?
Joe:  House of Blues, Sunset Blvd. They just treat you like you want to be treated.  Even though it can be pay-to-play, and despite a couple of douche bags in the security staff, they have a real respect for musicians in that place.  It’s also this multi-level complex with elaborate décor, great green rooms, and a great sound.  Hands down the best venue on the Strip.

ITN Magazine: First band t-shirt you ever purchased from a merch table?
Joe:  A black Rage Against the Machine shirt, with a white skeleton shouting out through a megaphone, “Who Laughs Last?” Lost that one to the cops.  The irony kills me.

ITN Magazine: Band you’d leave your band mates for?
Joe:  The Doors.  If they wanted to do a final worldwide reunion tour and asked me to play Jim.

ITN Magazine: Album you wish your parents exposed you to in the womb?
Joe:  Exile on Main St.

ITN Magazine: If for some reason you lost the ability to make and play music, what would fill that gap?
Joe:  A bullet.

ITN Magazine: Would there be any one band or musician that would surprise us that you are listening to them?
Joe:  I hope not.  As a musician, it’s healthy to expand your parameters of style.

ITN Magazine: Where can our readers find your band on the internet?
Joe:  Google us!  Also, Facebook, Twitter, and You Tube.  Our website is www.dayaboveground.com, and lest we forget, ITUNES WORLDWIDE!!

ITN Magazine: How has Social Networking (Facebook, Twitter, etc.) impacted your band
Joe:  The social networking world has definitely changed the game, for better and for worse.  On the upside, it’s a great way to reach out to fans globally, in ways where in the past it could only be through giant label distribution.  On the flip side it kind of makes you feel artificial, like you’re only real to the world online (until you’re touring globally, of course.)

ITN Magazine: Thanks for answering these questions. Do you have any last comments or words of advice for the readers of In The Now Magazine?
Joe: Nope.

Just kidding.  Yes, actually, thank you so much for taking the time to read this and I hope you’re interested enough to check us out and “like” us on facebook and purchase “High View” and more on itunes.  Also, thank you to In The Now magazine for the opportunity to talk freely about what we’re doing.  I really, really, appreciate it!!  Stay In The Now, baby!!