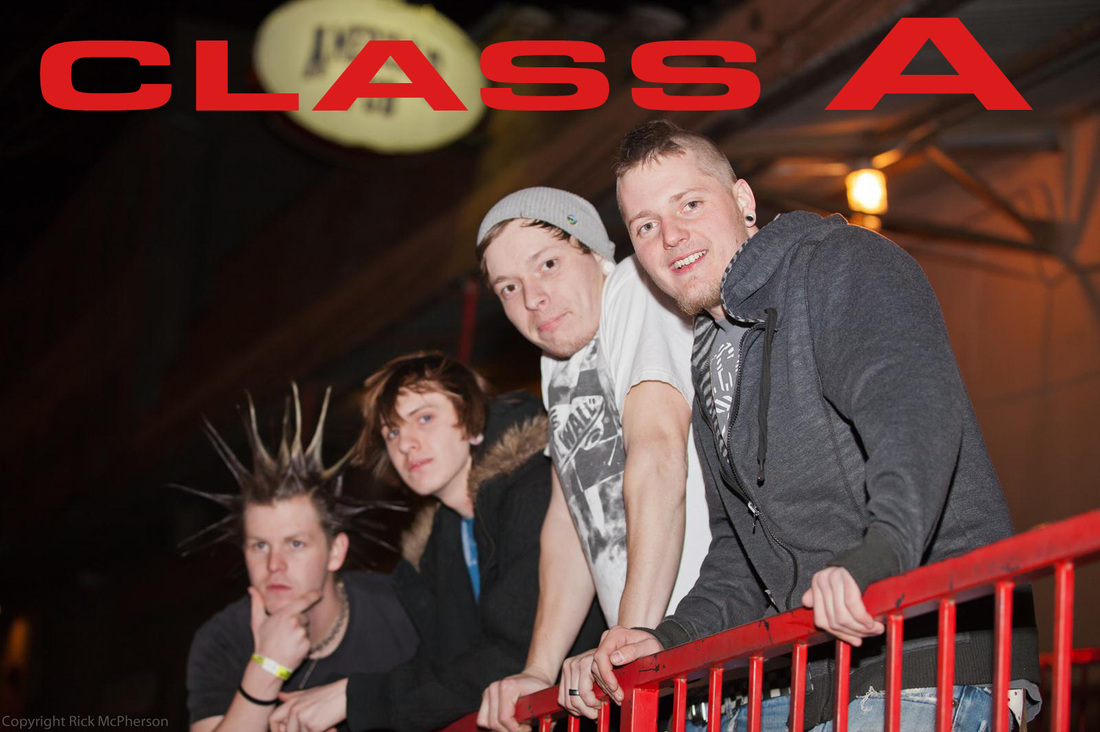 Biography: Class A is a combination of writers mashing musical influences heavily inspired by the catchy styles of the 90's. Also by modern day songwriters ranging from Taylor Swift, to Say Anything's Max Bemis, They've set a goal to compose brain haunting material, that will be constantly bouncing back in forth between both your ears. This is only the beginning, hang on and don't let go.

ITN: YOU GUYS ARE FAIRLY NEW TO THE MUSIC SCENE, TELL US A LITTLE ABOUT HOW YOU ALL MET AND CAME TO FORM CLASS A?

We had the frog-flipin' (current) lineup in mind since January 2011, but wasn't fully initiated until January 2012 when Kelton Birmingham (bass) & Anthony Patterson (drums)  [ex. Pro-Audio Mummies] became one with Class A. Our souls we're united at that point. We played our debut show as a full band at America's Pub Feb 25th, 2012.

ITN: CLASS A IS AN INTERESTING NAME FOR A BAND. WHY DID YOU CHOOSE TO GO WITH THAT AS THE BAND’S NAME?

TIM & TREY - (Unison): Okay, we we're hunting for the Fountain  Of Youth in the Bermuda Triangle. (Trey chimes in: “Because Younger bands obviously get more exposure.”) We had just been robbed of our ship "The Torquise Quail" .  So, we were on our lifeboat thing, and we we're just rowing along. Suddenly a Kraken popped up out of nowhere, and Tim and I gave eachother this look and said  "dude, THAT is Class A - shit!!"

ITN: YOU GUYS RECENTLY PLAYED AT AMERICA’S PUB (WICHITA). HOW WAS THAT SHOW FOR YOU GUYS?

ANTHONY: We really stoked about this show, it was our debut show, & we had a couple of kinks here and there, but all in all it went off good. Our sound guy was awesome! We had great feedback from all our fans on our first show!

TREY: Oh, and everybody wanted to blow us after the show!

[Class A, also recently played a show on March 31st, 2012 with headliners such as heavy local hitters such as “BARRELBRIGHT”, & Nebraska natives  “COLD STEEL”.]

ITN: YOU ARE WORKING WITH BRADFORD SKELLEY. HOW DID YOU GUYS MEET HIM, AND WHAT WAS THE THINGS YOU SAW IN HIM TO WANT HIM TO MANAGE YOUR BAND?

TIM: He kind of chose us, actually. This dude, Jeff Corbet (he's the sound guy for "Warrant" actually) approached Bradford at some bar we were at, with a suggestion on managing me solo. I guess they hit it off well, because  Jeff told Bradford that he could probably help me get my head out of my ass, and help me promote my music career! This was in late December 2011, early January 2012 when it started.

TREY: I wanted to be managed too! In my solo project "Trey & The Trey-ettes" and then Tim and I realized we're in the same band, [Class A] so he just decided to manage Class A acoustically with Tim and I, and then shortly after the full band came together, and it just happened from there. I actually met Bradford in 2007, and we got drunk at a party, and stole trashcans & signs, and we got back to the party and lit firecrackers in the trashcan in the house at the party! It pissed everyone off in the house, and I was like "dude"! We have been best friends  ever  since. At the time he mentioned how he knew a lot of bands such as “Bullet For My Valentine” & did  interviews, and booked/promoted shows and stuff, & after we became friends music has been something that bonded our friendship.

TIM: I met Bradford when he worked at "The Hookah Cafe", and we became friends through musical influences, & my old band “At Dawn We Slept” & “From The Dawn Of Decay” which played on one of Bradford’s first shows he booked & promoted with “HELL WITHIN” &” VANNA”. We both like a lot of the same music, and the friendship stuck!

Trey: He's been working with music, and putting on shows, all types of work in the musical industry, & done all kinds of professional work, and he seemed qualified to work with us! We're all best friends, it just seemed to work out.

ITN: DOES THE ENTIRE BAND CONTRIBUTE TO THE WRITING PROCESS?

We're all influences on eachother, from our individual, previous songs before the band. Anthony writes all his own drum lines as well, and…. has been for years.

TREY: & Pabst Blue Ribbon, puts us ALL under the influence!

TIM: As well as Jagermeister.

TREY: My fiance, Ashley Starr is a major influence, I have like 5 songs written & inspired about her.

TIM: All current, and previous girlfriends, family, jobs, - lack there- of jobs, and bad days have been our influences.

ANTHONY: The "Rev" from Avenged Sevenfold

ITN: ARE YOU CURRENTLY WORKING ON RECORDING A CD?

ANTHONY: Yes! Currently working on scratch tracks so I can record drums. I'm going to be personally recording with Ron Duncan ( drummer formerly of  “THIRD HILL”, currently with the bamd “SUITE 68”).

TIM: We actually have at least 50 songs written, however we are not sure which ones will make the cut for recording yet.

ITN: WHEN DO YOU WANT TO HAVE MUSIC AVAILABLE FOR THE FANS TO BUY?

[CLASS A, has demo cd’s for sell at every show. You can listen to some of our tracks at Facebook.com/ClassAband]

ITN: HAVE YOU STARTED THINKING ABOUT MERCHANDISE, FOR THE BAND?  IF SO WHAT ITEMS ARE YOU WANTING TO HAVE AVAILABLE?

TREY: Come to one of our shows, … yeah! We already have merch, we have Girls & Boys T-Shirts, Posters, stickers, & demo cd's  for purchase!

ANTHONY: We have this crappy symbol for sell,  that we autographed!

TREY: Yeah that we all signed, and for some reason no one wants to buy it! It’s still available!

TIM: Yet, it's worth it's weight in metal!

ITN: TELL US A LITTLE ABOUT CLASS A’s MUSIC STYLE, WHERE WOULD WE FIND CLASS A IN THE RECORD STORE?

TREY: We've yet to upgrade to Vinyl sorry!

TIM: You wouldn't find us in a record store, because our mom's would've bought all the copies up!

TREY: You would probably find us in the POP/ROCK section.

TIM:  Some even stolen from our own songs!

TREY: We all lived happily ever after!

ITN: FOR THOSE THAT HAVE NOT SEEN YOU LIVE , HOW WOULD YOU DESCRIBE A “CLASS A” LIVE SHOW?

(Trey failed to answer this question, because he said he wanted to come back to it & never did. Lol)

ITN: DO YOU HAVE ANY UPCOMING 2012 LIVE “CLASS A” SHOWS YOU WOULD LIKE TO PLUG?

ANTHONY: May 5th, we are playing “PUNKO DE MAYO” (Fineswine Productions) at THE LIZARD LOUNGE! We are also planning on playing on the SPIRIT AEROSYSTEMS float at the WICHITA RIVER FESTIVAL PARADE, June 1st! Opening night for Riverfest!

We also have some possible shows coming up, that are unannounced, but you can check out all of our dates on

We are also planning on doing weekend mini tours in the states surrounding Kansas, so we’re working with other bands on show swapping, etc. Book us, if you’re interested!

ITN: HOW HAVE SOCIAL NETWORKS HELPED YOUR BAND?

TREY:  They haven't really helped us with their full potential, we use them mainly to keep in connection with our fans. Updates, live shows, etc.

TREY: I'm getting married to my future bride to be, the beautiful Ashley Starr, and moving to California because she is in the Navy. Kelton will be taking over all my duties.

TIM: We will be auditioning for bassists in the future.

ITN: WHERE CAN READERS FIND YOU ON THE INTERNET?

are the main sources for CLASS A information currently!

ITN: ANY LAST COMMENTS, OR WORDS OF ADVICE FOR OUR READERS AT “IN THE NOW”?

TIM: I've been watching DRAGONBALL Z alot lately, and the great Goku (Kakarot) once said "If theres a will to win, I will find it!  Always base your haircut off Super Saiyans!

TREY: Stop reading! …I mean finish this issue of the magazine, and write a song. Then come to our show, play it for us, so then we can steal it! Oh, and don't ever sleep within a 10-foot radius of Anthony Patterson, because he will piss on you, and then you'll wake up, and think you're just sweaty. Then you'll see him passed out on your own floor, in a puddle of his own piss! Then you'll think to yourself "dang-it" that rascal is at it again! Then you’ll snap your fingers, and go right back to sleep!

[Class A roars in laughter] 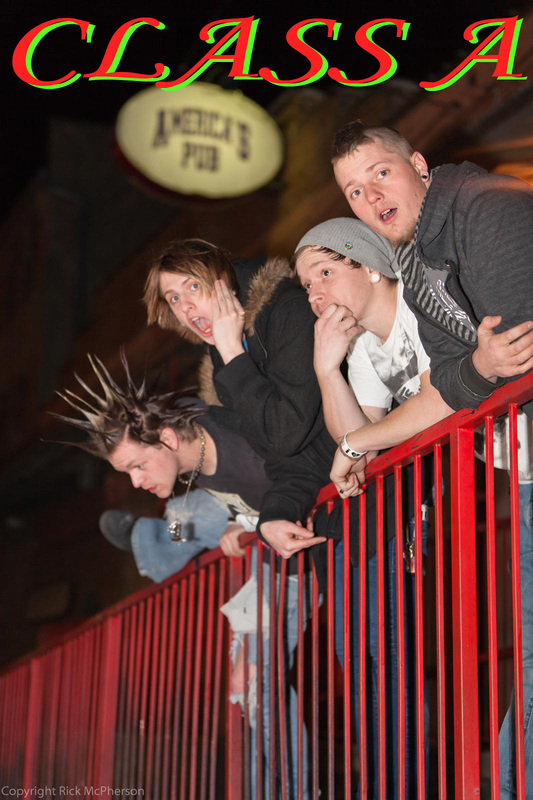